Benjamin with Kafka: Babylon, Jewish Language and the Image Ban

Lecture in the “Between Jewish Languages” Research Group, August 2021

“Architecture did not fall into the worship of visual images”

Hermann Cohen, Religion of Reason, Out of the Sources of Judaism

“No human art appears as deeply compromised as the art of building in Kafka. None is more vital and none makes perplexity more perceptible”. (‘The Great

The lecture dealt with instances of the story of Babel  and the art of construction in the writings of Franz Kafka and Walter Benjamin through the latter’s theories of language and translation and the Babylonian metaphors embedded therein. Can we ascribe to the Tower of Babel Benjamin’s evocations of architecture in the aforementioned reference to Kafka, in “The Work of Art in the Age of Mechanical Reproduction”, as well as the architectural scenes that close his book on The Origin of German Tragic Drama? The abandoning of the tower, the forgoing of pure language, of the given name (“let us make us a name”; Genesis 11: 4) and of the universal abstraction through the scattering of languages – can all these be considered markers of a “Jewish language”?

In Hegel’s aesthetic theory (1998) in his discussion of architecture with reference to the story of Babel, we can identify the Benjaminian conception of allegory (2019:3) – the tower’s “material content” is embedded in its “truth content” without the opening up of the space of representation. For Hegel, the Babel story constitutes a double negation: the tower’s impossibility of representing God through a material mass that lacks an inner space, and the abandonment of representation by the very same community. The tower’s violent demolition by God, which perhaps corresponds with the violation of the Second Commandment, has led to the dispersal of the community and thereby turned it into a marker of exile, an allegory of a community that huddles around holiness, as Hegel quotes Goethe (p. 638).

Babel is the name of a city that was abandoned and which survived as a ruin. In Benjamin’s image gallery, and particularly in The Origin of German Tragic Drama, the ruin is the paradigmatic site where history becomes eternal nature through processes of material decomposition or decay (2019: 188). Images of ruins in Benjamin’s writings are related to the concept of “natural history” (Naturgeschichte). This is a concept or an idea that embody the impossibility of severing nature from history. Benjamin’s conception of nature is dual – messianic and eternally ephemeral: “nature is Messianic by reason of its eternal and total passing away”, he writes in “Theologico-Political Fragment” (2006: 306). This “natural history” notion is fundamental to Benjamin’s philosophy of history (Adorno, 1973), and it is also manifested in the structures of consciousness that are woven through his writings, such as intensity, tactility, melancholia and déjà vu.

Benjamin (1996) describes the messianic end of the task of translation as follows: “all communication, all meaning, and all intention arrive at a level where they are destined to be extinguished” (p. 261). What language conveys – either in the original or in the translated form – is bound to extinction. Bound to converge into a depthless, tangible and tactile layer. This extinction of the content delivered is above all the betrayal of language in its essential, transmittable nature, for what is delivered in Benjaminian parlance is “pure language”, a language which is more than anything an anti-language, one “which no longer signifies or expresses anything”, manifesting itself as “expressionless and creative word” (ibid.).

In one of his fragmented parables, Kafka (1975) writes of Babel: “If it had been possible to build the Tower of Babel without climbing it, it would have been permitted” (pp. 34-35). Would the building of the tower have been permitted by law – the one which for Kafka transcends any representation and any history – had it not been the yearning of the finality of life to the infinite that constituted it or was constituted thereby? In The Origin of German Tragic Drama, Benjamin comments that allegory “clings with all its organs to the eternal” (2019: 192). Also allegorical is the Babylonians’ call for a name: their double desire to turn the finite – the scattering of the nuclear family, exile and intermarriage – infinite, and to reproduce through language the idea of a life that is more than death. The story of Babel is one of the building blocks of Benjamin’s theory of translation, as it indicates that it is not the infinite, the abstract and pure that persist, but rather nature in its “eternal passing away”. The confounded language (“Go to, let us go down, and there confound their language, that they may not understand one another’s speech”; Gen. 11:7), the language that was not just confounded but also shrivelled, as the Hebrew verb also seems to suggest, means, in Benjamin’s words, “the continually renewed, and most complete unfolding [of translations]” (1996: 255).

Through the reflection of the Babylonian allegory and the parabolic (allegorical) architecture in Benjamin’s interpretation of Kafka in his theory of language and translation, we can point to Benjamin’s critical move as one that is active in manifesting the exiling – of the physical out of the symbolic order, of the finite out of the infinite, of the tactile experience out of the sensory-optic experience, and of the acoustic dimension, as expressed in the orders of lament and melancholy, out of language.

Benjamin (1996) assumes that the translator’s task is “to release in his own language that pure language which is exiled among alien tongues” (p. 261), and this is true also of religions: “the growth of religions ripens the hidden seed into a higher development of language” (p. 257). The discussion following the lecture focused on the issue of a “Jewish language” through the questions of time and space, exile and Unheimlichkeit. The notion (or term) of “Jewish language” was considered through the way it operates within the structures of consciousness, history and the concepts of language on which Benjamin wrote, regardless of the question whether his philosophy should be regarded as “Jewish”. 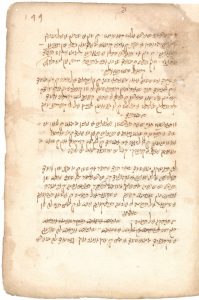 Review of a Sephardic version of the Dance of Death in a Jewish Tradition (Ms. Parma 2666) 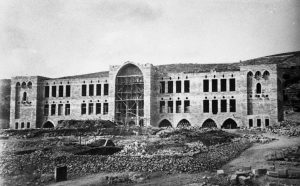