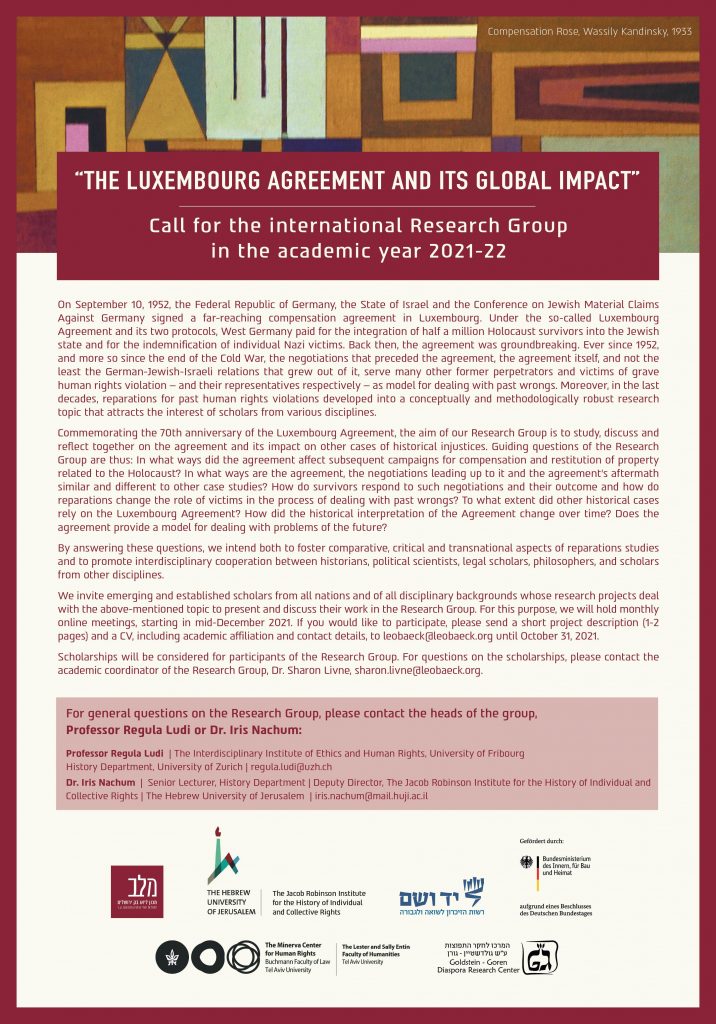 On September 10, 1952, the Federal Republic of Germany, the State of Israel and the Conference on Jewish Material Claims Against Germany signed a far-reaching compensation agreement in Luxembourg. Under the so-called Luxembourg
Agreement and its two protocols, West Germany paid for the integration of half a million Holocaust survivors into the Jewish
state and for the indemnification of individual Nazi victims. Back then, the agreement was groundbreaking. Ever since 1952, and more so since the end of the Cold War, the negotiations that preceded the agreement, the agreement itself, and not the least the German-Jewish-Israeli relations that grew out of it, serve many other former perpetrators and victims of grave human rights violation – and their representatives respectively – as model for dealing with past wrongs. Moreover, in the last decades, reparations for past human rights violations developed into a conceptually and methodologically robust research topic that attracts the interest of scholars from various disciplines.
Commemorating the 70th anniversary of the Luxembourg Agreement, the aim of our Research Group is to study, discuss and reflect together on the agreement and its impact on other cases of historical injustices. Guiding questions of the Research Group are thus: In what ways did the agreement aect subsequent campaigns for compensation and restitution of property related to the Holocaust? In what ways are the agreement, the negotiations leading up to it and the agreement’s aftermath similar and different to other case studies? How do survivors respond to such negotiations and their outcome and how do reparations change the role of victims in the process of dealing with past wrongs? To what extent did other historical cases rely on the Luxembourg Agreement? How did the historical interpretation of the Agreement change over time? Does the agreement provide a model for dealing with problems of the future?
By answering these questions, we intend both to foster comparative, critical and transnational aspects of reparations studies and to promote interdisciplinary cooperation between historians, political scientists, legal scholars, philosophers, and scholars from other disciplines.
We invite emerging and established scholars from all nations and of all disciplinary backgrounds whose research projects deal with the above-mentioned topic to present and discuss their work in the Research Group. For this purpose, we will hold monthly online meetings, starting in mid-December 2021. If you would like to participate, please send a short project description (1-2pages) and a CV, including academic affiliation and contact details, to leobaeck@leobaeck.org until December 1st, 2021.
Scholarships will be considered for participants of the Research Group. For questions on the scholarships, please contact the academic coordinator of the Research Group, Dr. Sharon Livne, sharon.livne@leobaeck.org.
For general questions on the Research Group, please contact the heads of the group,
Professor Regula Ludi or Dr. Iris Nachum:
Professor Regula Ludi | The Interdisciplinary Institute of Ethics and Human Rights, University of Fribourg
History Department, University of Zurich | regula.ludi@uzh.ch
Dr. Iris Nachum | Senior Lecturer, History Department | Deputy Director, The Jacob Robinson Institute for the History of Individual and Collective Rights | The Hebrew University of Jerusalem | iris.nachum@mail.huji.ac.il