For information on the Austrian Heritage Collection please write to: austrian_heritage_collection@leobaeck.org

From Austria to Israel: Documentation of Jewish Life Stories

and survivors of the Shoah who had fled to the United States, and in. 1996 a database was set up containing questionnaires, collected documents, and Oral History interviews. At the present time, about 700 more audio interviews have been conducted and are accessible to the public at the Leo Baeck Institute New York Archive. This represents the most comprehensive historical collection on Austrian-Jewish emigration to the USA, as well as one of the largest collections on the history of exile.
The interviews are available through the LBI New York catalog.
In 2012 the Leo Baeck Institute Jerusalem initiated the Austrian Heritage Collection project with the cooperation of the Verein GEDENKDIENST, erinnern.at and the Wiener Wiesenthal Institute for Holocaust Studies.
A questionnaire was sent out to approximately two thousand Israelis of Austrian origin, as well as others who hailed from German-speaking regions of former Austria-Hungary. Nearly a fifth of those contacted agreed to fill out a second and more detailed questionnaire, to provide personal photographs and biographical documents, or give an interview. Besides documenting their lives prior to and during the Nazi persecution, the project focused on the process of migration and acculturation to new surroundings and the challenges that this involved.

A remarkable collection of data was amassed, including ninety video interviews. The collected data has been partly digitalized and is stored in the Institute’s archives where it is readily accessible. Moreover, the audio files of the interviews will subsequently be uploaded to the catalogue of the Leo Baeck Institute New York and are accessible here.

Our colleagues in Austria have also created an online database called the Austrian Heritage Archive, where documented biographies are available for research and pedagogical purposes, and as a source of information for interested members of the public. The Austrian Heritage Archive presently contains a selection of twenty video and audio interviews from the Austrian Heritage Collections in Jerusalem and New York. Alongside the interviews, further biographical information, digitalized documents and photographs, and interview transcriptions are available here: http://austrianheritagearchive.at/de

The Austrian Heritage Collection is an ongoing project at the Leo Baeck Institute Jerusalem. The generous support provided by the National Fund as well as the Future Fund of the Republic of Austria will enable us to conduct further interviews. In November 2018, the conference Nach dem Anschluss. Remembering Austria’s 1938 which was hosted by the Leo Baeck Institute Jerusalem in cooperation with the Center for Austrian Studies and the Richard Koebner Minerva Center, both at the Hebrew University of Jerusalem. The conference offered an ideal platform for /introducing the Austrian Heritage Collection to the general public as well as to scholars. The conference aimed to examine the collective as well as individual memories of the so-called ‘Anschluss’ of Austria in 1938 as represented in literature, film documentation, and the politics of history as well as oral history. The Austrian Heritage Collection served as a point of departure for the conference, providing a powerful testimony of personal experiences of Austrian Jews at the time of the ‘Anschluss.’
Excerpts of the interviews were screened in the presence of the Austrian Ambassador to Israel Martin Weiss and Mr. Otto Nagler.

The Oral History Colloquium is a monthly meeting of scholars using qualitative interview-of-life stories for various research purposes, and is jointly organized by the Israeli Oral History Association and the Oral History Archive at the Hebrew University of Jerusalem. 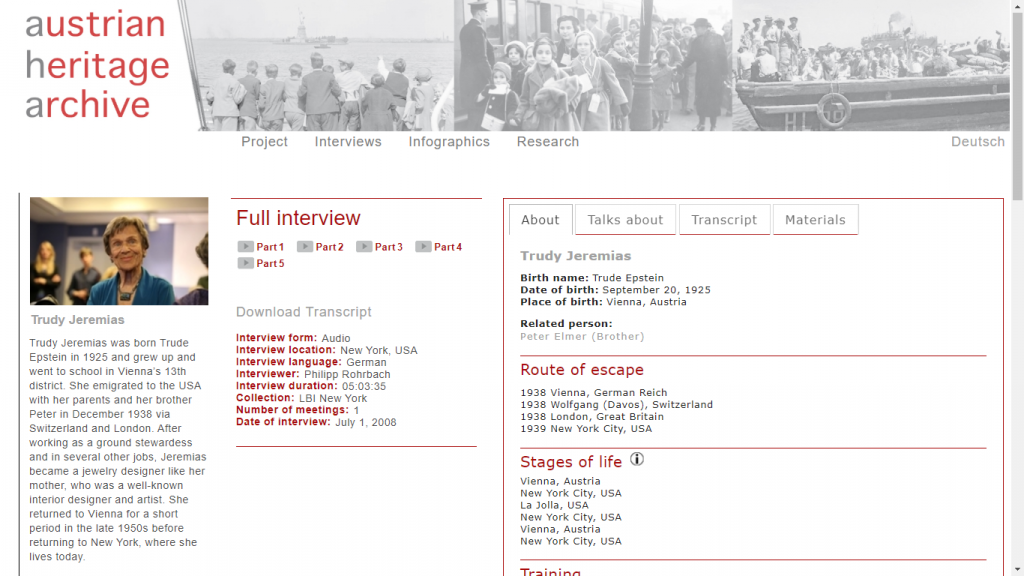